Marketing is Our Passion

The Internet is Our Medium

NetStuffers is an Indianapolis, IN website development and internet marketing firm focused on helping businesses grow by utilizing the vast resources of the net. Whether your business is large or small, if you don't have a full grasp on how your brand is portrayed and interacted with online, you could be missing huge opportunities. That's where we come in.

Indy PopCon , an Indiana Comic Convention coming in May of 2014, presented a unique challenge for our design and development team.  The website had to feel inviting and fun, yet avoid looking too cheesy and cartoony.  The website needed to be professional and unique, but had to avoid being corporate.  Oh, and by the way, make sure it's mobile friendly!

Thankfully, our team features more than a few with a thirst for gaming, comics, and pop culture, so we knew the audience we wanted to attract.  We also wanted to be thorough and not leave anybody out.  Thus, the Choose Your Character panel was born.

Drawing on pop art inspiration, colorful panels were created that represented each of nine genres chosen by the PopCon team.  Each panel would link to an interior page with additional information, and each panel would ultimately represent the sort of person who might be inticed to click on it.

After a successful product and brand launch, PopCon gathered over 1,400 fans across their various social networks in under a week's time.  And they're just getting started!

Getting Bill Hurst Up to Speed

After leaving his previous firm, William ‘Bill’ Hurst faced a dilemma.  All of his branding and name recognition had been based upon his previous firms website, and he none of his own.  When people Googled for Bill Hurst, they often found his previous firm and found no data about where Bill had gone.  Recognizing that he needed to build an internet presence from scratch, he contacted the team at NetStuffers to get him up and running.

NetStuffers started with the basics by designing a new website for Bill’s new firm and installing it on the NetNinja Content Management platform.  Armed with the ability to make his own changes to the site, Bill was able to rewrite the content on each page to make sure it fit his new image and voice.  The NetNinja platform also took care of much of his SEO work for him by creating dynamic URLs and populating his meta tags with key terms he needed to be found.

Following the successful launch of his website and a basic SEO campaign that focused on targeting local keywords, Bill Hurst now has an internet presence that he can be proud of and finally call his own.

If you're bored and/or confused already, don't worry. You're not alone. In the fast-paced internet marketing field, there are new technologies and strategies created and dissected almost daily. You don't need to worry about them, however, if you work with NetStuffers.

That is because we have decided to utilize a brand new term that we feel properly summarizes where we are at as a company. At NetStuffers, we are "Buzz term Certified." If you can name it, we probably know it. If we don't our team of researchers and internet tubes experts will bust out the CSI gear and investigate until we're fully satisfied and informed. Don't worry about keeping up with technology, because we've got you covered!

To see a full list of all of ours services, please visit our services page, or feel free to contact us directly! 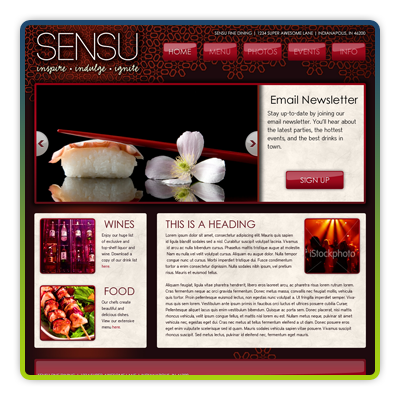 We're very proud to have worked with what is now one of Indianapolis' hottest new nightclubs, Sensu. When we were approached by the team at Epic Hospitality, they wanted a site that reflected the upscale quality of their menu with an Asian theme that promoted the exciting nightlife atmosphere of the club.

Additionally, they needed a Content Management System so that they could quickly update their pages, add events to their calendar, and manage their menu. We provided them with a website developed on our NetNinja content management system and launched in early March.